Known as the historical center of Hanoi, the Hoan Kiem Lake is heralded as one of the best spots to visit in Vietnam. This majestic place, situated inside the Ngoc Son Temple complex, has already undergone some renovations, but it remains to be one of the country’s sources of national pride. If ever you are in Vietnam, a visit to Hoan Kiem Lake is something you ought to include in your itinerary. Here is a brief travel guide to help you plan your tour perfectly. 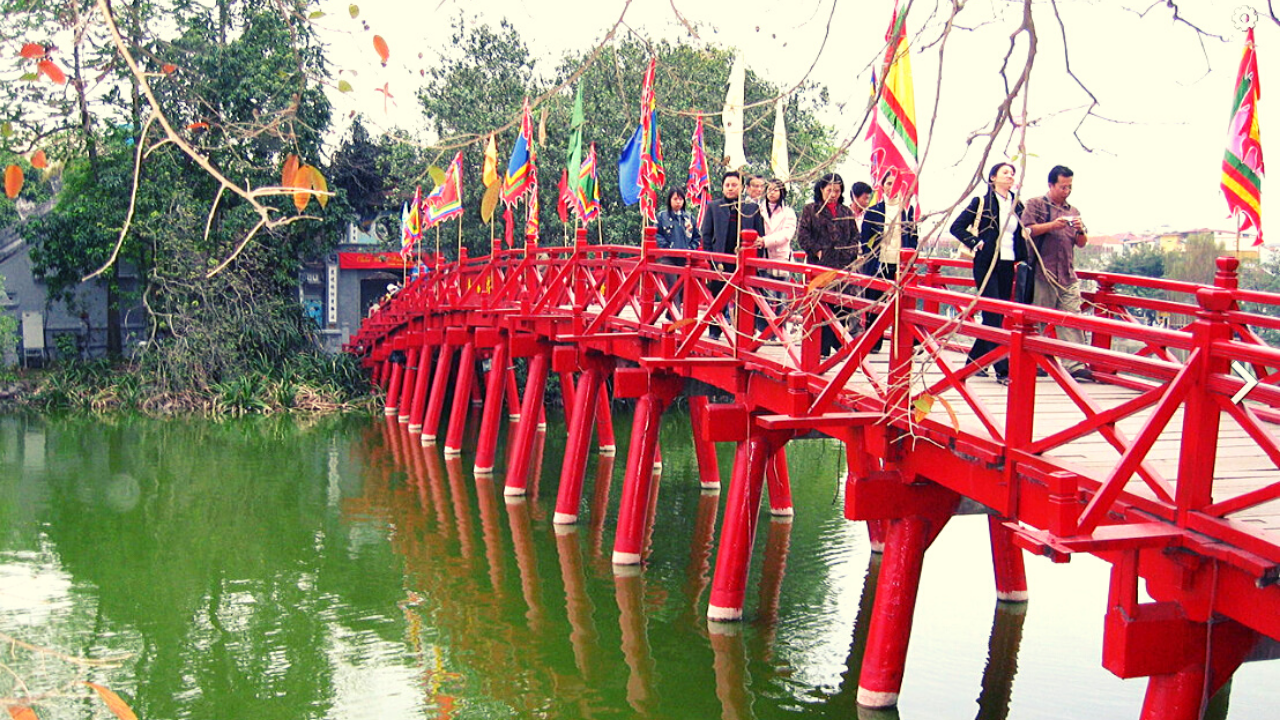 According to folklore, Le Loi, a resistance leader, found a magnificent sword while fishing in the Hoan Kiem Lake. With this on hand, he managed to succeed against the Chinese conquerors from the Qin dynasty. Le Loi eventually became an emperor. In gratitude for the help the sword gave him, he decided to sail through what was once called the Thuy Quan Lake again to thank the gods who have helped him. Suddenly, a thunderous bolt swept the air, and a golden turtle emerged from the waters, shouting, “Please give back the sword to the Dragon King!” Without hesitation, Le Loi threw the sword to the lake. The turtle grabbed it and dove back down, never to be seen again. Since then, Thuy Quan became Hoan Kiem, which means “Lake of the Returned Sword.”

Getting to Hoan Kiem Lake

The Hoan Kiem Lake is comfortably seated at Hanoi’s city center, along the intersection of Phung Hung and Tran Nhat Duat streets. 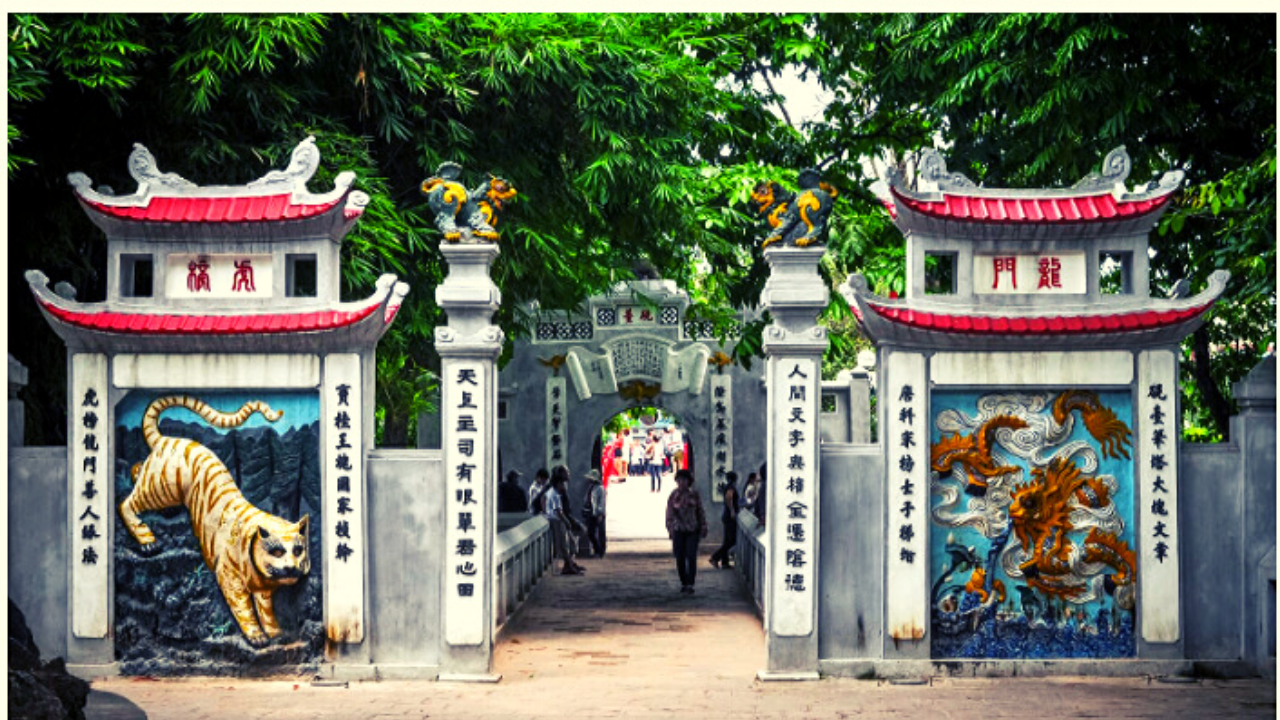 The Hoan Kiem Lake is open from 7:30 a.m. to 6 p.m. daily. However, the best time to visit the area is during early in the morning, when you can see a bevy of young and mature fitness enthusiasts huddling in the garden for a session of tai chi, calisthenics, and other exercise workouts. Dropping by the Hoan Kiem Lake during late afternoon is a good plan as well, because during these times you can enjoy the sight of motorbikes traveling along the lake. Cyclos or three-wheeled carriers can be seen during late afternoon visits as well. 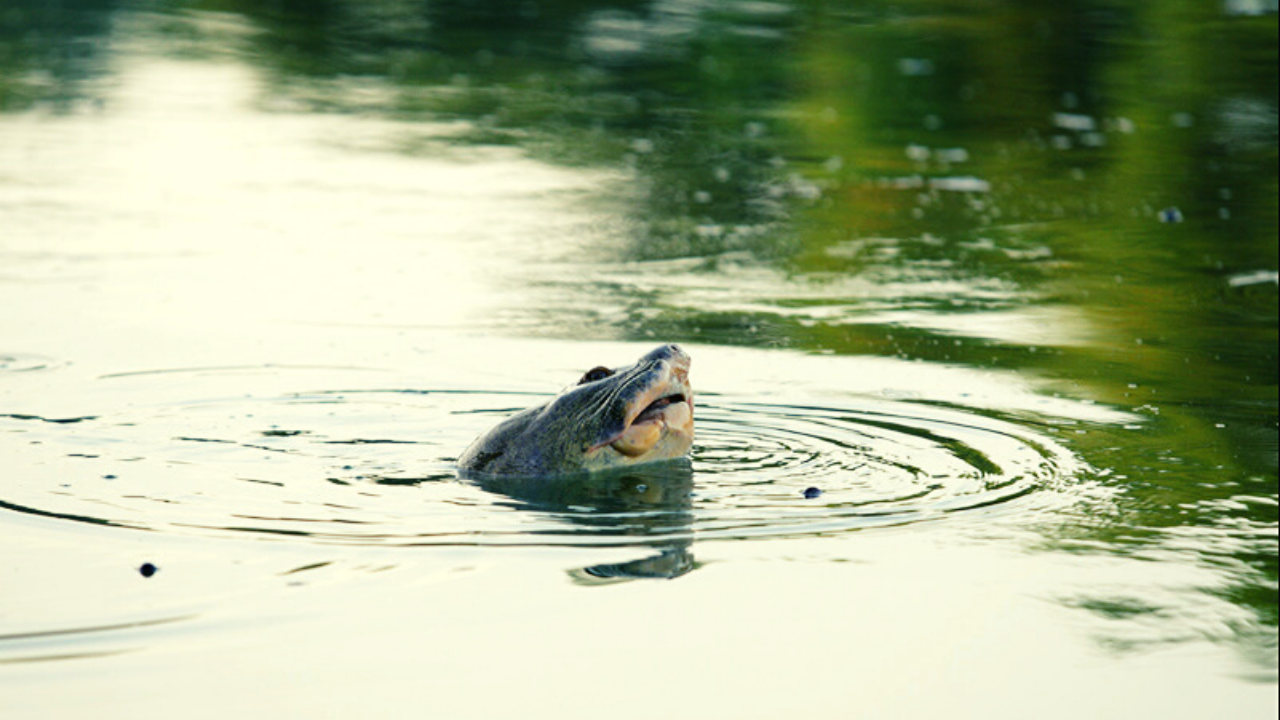 While Le Loi’s story is considered as a myth, there are actually some giant soft-shelled turtles that can be seen emerging from the water every now and then. How many tortoises remain underwater are largely unknown, but those who witness these turtles believe them to be signs of good luck.

The most recent sighting of the lake tortoises was in 2004, believed to be a result of prolonged, dry weather. One tortoise was seen on a tiny island where a tortoise pagoda is erected. Because of this event, the government organized measures to clean the waters and free the remaining tortoises of choking mud.

2) Temple of the Jade Mountain 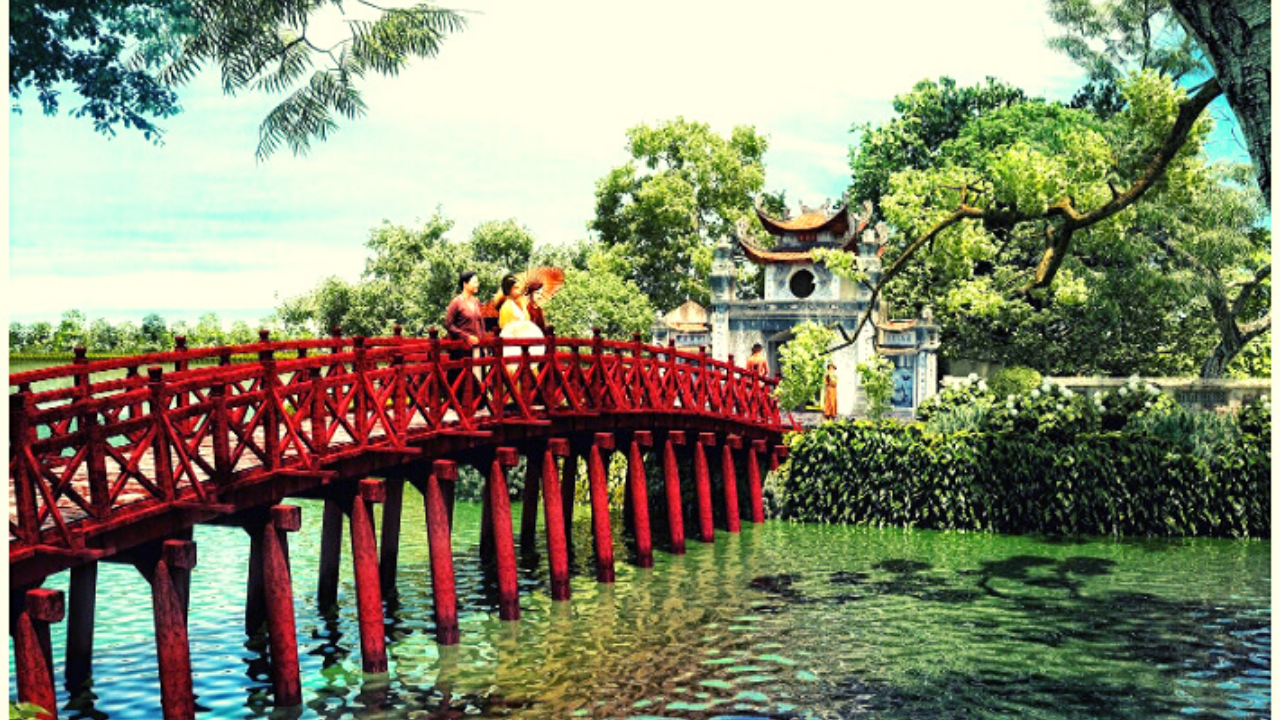 While Hoan Kiem Lake’s turtles are barely seen anymore, visitors can still get a glimpse of a preserved giant tortoise housed inside the Ngoc Son temple, otherwise known as the Temple of the Jade Mountain. Getting to the Ngoc Son temple can be done easily by treading the paths of the red Huc bridge.

This revered infrastructure, which was built in the 1800’s during the Nguyen dynasty, is one of the best spots to visit inside the lake vicinity. The temple, which was erected on a Jade islet, commemorates the lives of Taoist and Confucian philosophers, as well as the gallantry of Tran Hung Dao, Vietnam’s national hero.

Upon reaching the Ngoc Son temple, you will be mesmerized by its exquisite carved dragons and elegant eaves in gold, red and black. You will be greeted by a stylized stone ink slab, as well as an elegant and elongated stone pillar. 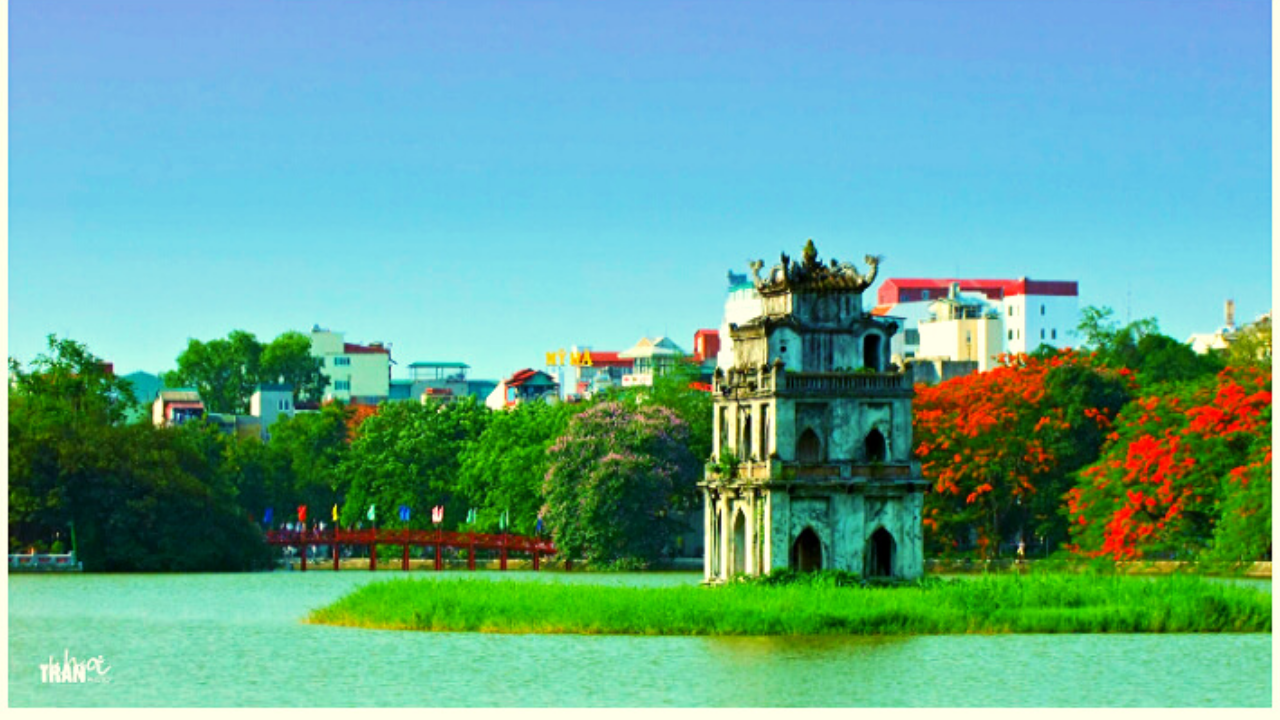 Another breathtaking structure found within the Hoan Kiem Lake vicinity is the Pen tower, known to the locals as Thap Bat. Formerly called Dao Tai, the tower on the hill bears the inscription “Ta Thien Thanh” or “Write on Blue Sky.” Inside the tower premises, you can also find an inkwell-shaped pool – the proof that the Pen Tower is staying true to its name. 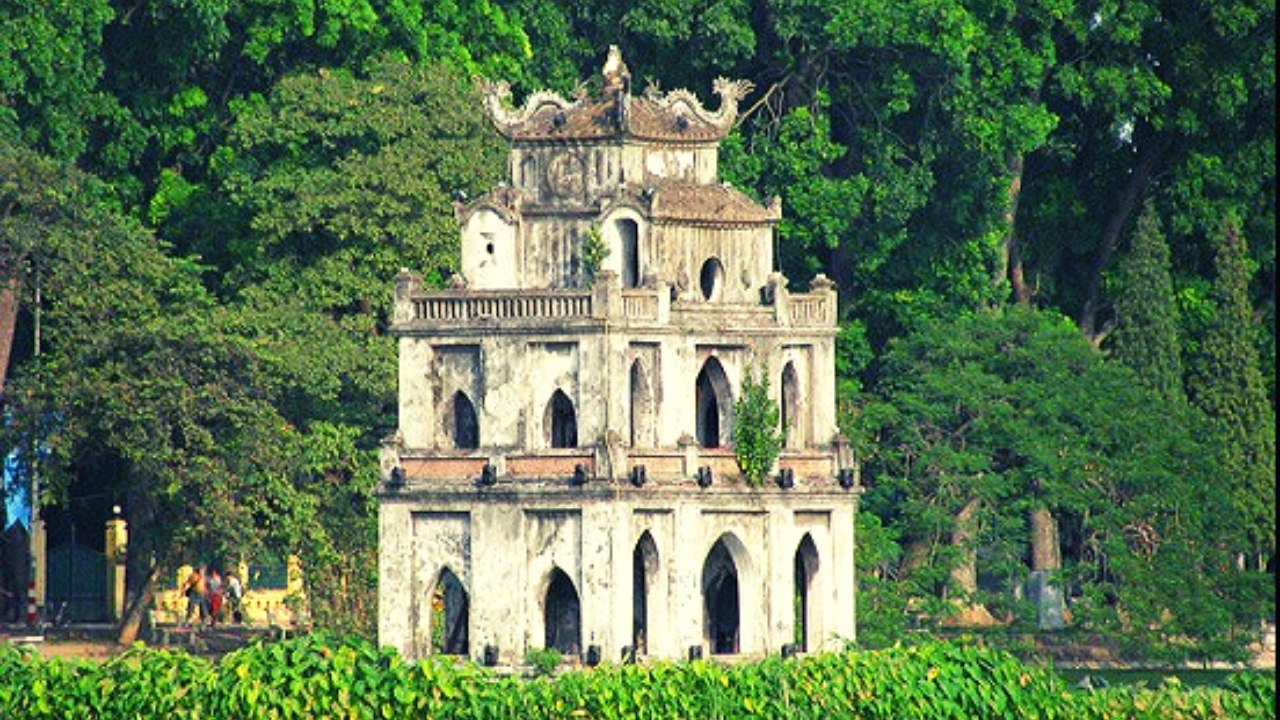 Famously known as the “Turtle Tower,” it sits comfortably in the heart of the Hoan Kiem Lake. It was constructed in 1886under the reign of Le Thanh Tong, on the location of a former fishing site. The turtles on the base of the Thap Rua are said to be of the same species that gave Le Loi the magical sword that helped him win his battle against the Chinese.

While it was plagued with scandals for so many years, the Thap Rua has been elevated into a famous Hanoi structure – likened to Italy’s Leaning Tower of Pisa. 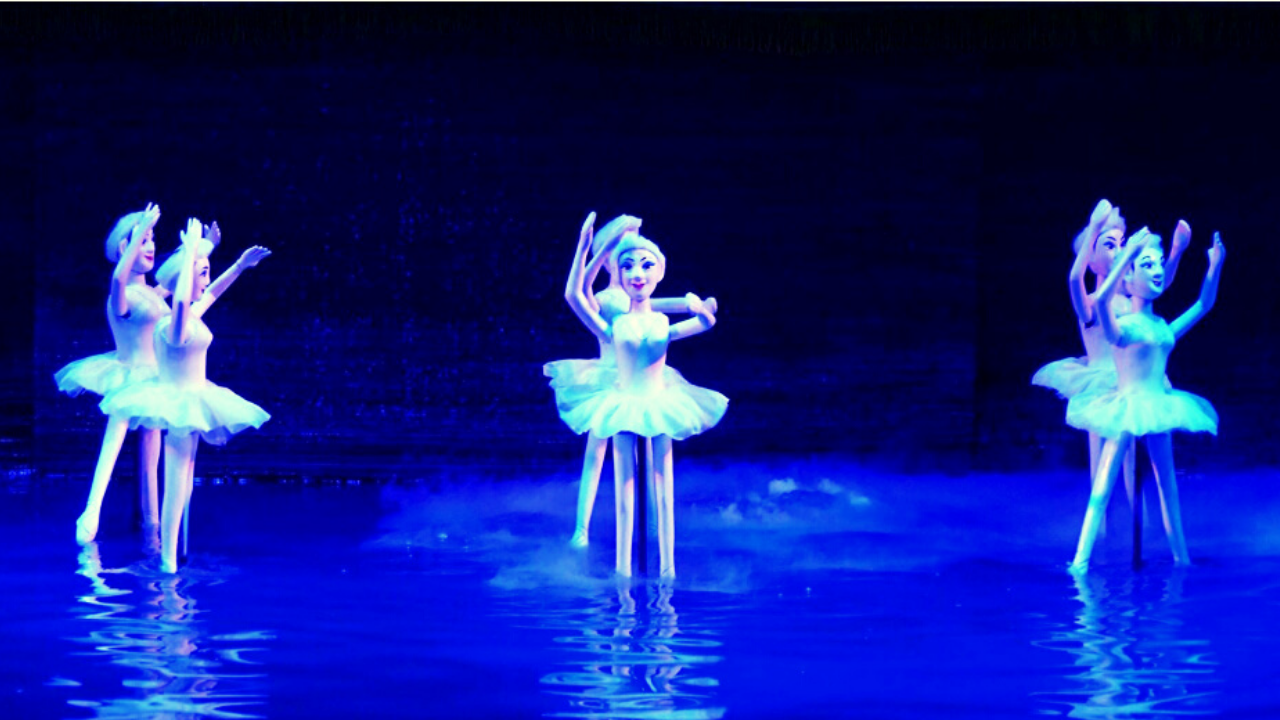 Located at 57 Dinh Tien Hoang St., the Thang Long Water Puppet Theater is located just across the Hoan Kiem Lake. Hailed as one of the best attractions in all of Hanoi, the theater relives many of Hanoi’s myths, including that of Le Loi and his encounter with the golden turtle.

The show stars wooden humans and dragons, reenacting the amazing details of Vietnamese folklore as they wade through the waters of the Hoan Kiem lake. Most narratives are in Vietnamese, although you can watch one in English, among many other languages. Ticket prices range from USD 2.90 to USD 4.80.

Dubbed as the “Pearl of Hanoi,” Hoan Kiem Lake truly makes for an exciting addition to your itinerary. With its quaint, rustic appeal and genuine historic attractions, it has unsurprisingly become a budding tourist destination over the years. Hoan Kiem Lake guarantees you no less than an unforgettable Hanoi vacation/sightseeing experience.