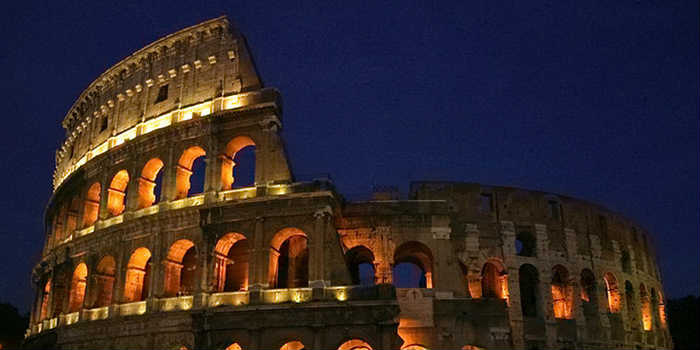 Rome, truly, wasn’t built in a day. But you never get to realize the accuracy of this aphorism till you traverse through the Eternal City and witness its awe-inspiring works of art and architectural masterpieces that took several painstaking years to build. Such experience is similar to taking a trip through thousands of years of enthralling history, all juxtaposed into the present day. You’ll be greeted by a myriad of attractions that even the locals themselves need a lifetime to catch a glimpse of. The floodlit ruins of Imperial Rome and the magnificent piazzas by Bernini and Michelangelo are a mere addition to the long list. So how and where do you start? ‘Here is a compact guide to everything you need to know about Rome, if you ever consider going there one day.

There is no off-peak season for Rome visitors– thanks to its lovely Mediterranean weather. However, if you dislike walking under the scorching heat, then don’t plan your trip for the summer season. The most pleasant seasons for your vacation are spring and fall. However, since these are the super peak times, you can expect crowded attractions and more expensive hotel rates. Winter, which spans from January to March, comes with low hotel rates, but it’s a risk, given the unpredictability of Rome’s weather.

The best way to get around the Eternal City is through its bus routes, which are highly reliable but oftentimes crowded. You can purchase tickets from cigarette shops (tabacchis, marked with a blue T sign) for USD 2/100 minutes. One-day, three-day, and weekly passes cost USD 8.00, USD 22.00 and 32.00 respectively.

Another option is the Hop-On, Hop-Off bus which takes you to different tourist spots in Rome. A one-day pass can cost up to more than USD 24. Taking the tram is also a good way to tour Rome’s historic districts. A commuter rail ride, on the other hand, is a great option for those who want to explore the city’s outskirts. Taxicabs are also available with a starting rate of USD 4.00. Fares can mount though, especially during rush hours.

Taking Rome by foot, the best option, gives you enough time to marvel at the beauty of its architectures and the opportunity to have some excellent pictures taken. But if you find walking too tiresome, you can also opt to bike around. Segway rentals are widely available in Rome.

The Roman government ensures a perfect balance between small festivals and large-scale, citywide events, making ample use of Rome’s most photogenic venues year after year. Here are some of Rome’s much-anticipated yearly events that you yourself should watch out for.

During Rome’s Cultural Heritage Week, its state-owned museums and monuments open their doors to the public–locals and tourists alike–without any charge. 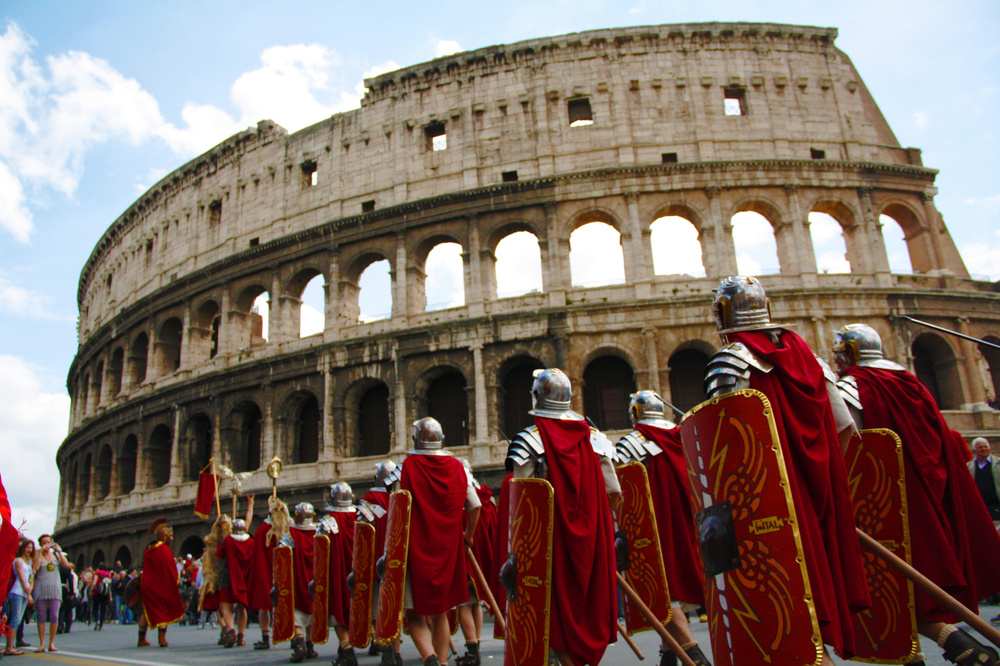 Not all metropolises around the world celebrate their birthdays. But Rome, born in 753 BC, never misses it. This event is serious business.  The bulk of the festivities are held at the Campidoglio. Rome’s city hall and its other palazzi on the hill are illuminated, and a spectacular fireworks display is launched.  Natale di Roma is held on the 21st of April, every year.  If you can, go visit Rome’s Civic Museum on this day– it will be free.

Tourists and pilgrims storm into the city on the Saturday before the Palm Sunday weekend, cramming the confines of St Peter’s square for the open-air mass. The non-stop services of Holy Week peak in the pope’s Stations of the Cross (Via Crucis) and mass at the Colosseum late on the evening of Good Friday.

Started in 2006, Rome finally had for itself a film festival to match its iconic cinematic status, rendering the city’s once glorious film industry a much-needed shot in the arm. Linked to another feisty newcomer – New York’s Tribeca Film Festival – Rome’s very own film festival boasts both arthouse kudos and the money to lure stars and big players.

5) Fotografia (April to May)

Fotografia, or the Roman annual photography festival, sets a wide range of exhibits in venues all across the city, from historic museums to avant-garde backstreet galleries.

A great thing about Rome is that every inch of the city is filled with historic attractions and ancient ruins. While you may not be able to see them all, it pays to take take your feet to these sights.

The Colosseum is almost synonymous to the Holy Roman empire, that is why it is the foremost place to visit while in the district. This ancient structure used to be the playground of the royals, where they entertained themselves and the crowds with the brutal killing of warriors (think Russell Crowe in the movie ‘Gladiator.’) Admission price is about USD 21.

As the headquarters of the head of the Catholic Church – the Pope – St. Peter’s Basilica is technically an attraction of the Vatican City. However, since the city is within the confines of Rome, it is considered a Roman treasure as well. With a dome designed by Michelangelo, and the square designed by Bernini, the Basilica gives the ultimate high to religious and artistic people alike. Admission price is USD 16.

Built in the 7th century, the Pantheon is one of Rome’s best-preserved edifices. Formerly a temple for Roman gods, the Pantheon is now one of Rome’s most famous Catholic churches. Its most striking feature is its oculus, a central opening located on the peak of the dome. Truly a marvel of architecture, the Pantheon’s dome remains to be the largest unreinforced concrete cupola in the entire world. Entrance is free.

Located in the midst of Capitoline Hills and Palatine is the Roman Forum (Forum Romanum), which served as the hub of Romans eons ago. In its heyday, it was the site of elections, processions, and tribunals. Now, this UNESCO world heritage site attracts millions of visitors every year, mostly because of its highlights, such as the temples of Saturn and Antoninus Pius, and the arches of Titus and Septimius Severus. Admission fee is USD 16.

This beautiful fountain is well-known for being the backdrop in the iconic movie La Dolce Vita. But apart from its cinematic value, it is also famous for its Baroque style, courtesy of visionary Nicola Salvi. It is said that whoever throws a coin in the free-admitting fountain will soon find himself back in Rome.

A commanding structure set against the Tiber River, the Castel Sant Angelo once served as the resting place of Emperor Hadrian. Nowadays, this famous Roman site plays home to a museum that highlights what remains of Hadrian’s mausoleum. Papal apartments which served as refuge to fleeing popes during the rough periods of Christian history can also be seen in this medieval castle. Admission to this grand castle, which is connected to the Vatican costs about USD 11.

If gazing up at historic attractions has put a strain on your neck, then how about looking down at some views instead? The Vittoriano, a huge white monument built in tribute to Victor Emanuel II (the first king of a unified Italy), features a lift that will zip you up to its roof-top terrace cafe to enjoy a bird’s eye view of all of Rome.

Circus Maximus, the largest stadium back in ancient Rome, used to host Ludi and chariot races for a thousand years. It was said to seat 250,000 people, which was a quarter of Rome’s total population back in the ancient times. Admission to Circus Maximus is free.

Address: Between Via dei Cerchi and Via del Circo Massimo, 00153 Rome

The largest public park in Rome, Villa Borghese guarantees a pleasant respite after a long day of touring the bustling streets of the city. Once inside the park, take your feet to notable sights like the ‘Giardino del Lago’ (garden of the lake), the ‘Tempietto Greco’ (small Greek temple) from 1700, and the Piazza di Siena, a picturesque race course enveloped with pine trees.
Address: Piazzale Flaminio, 00155 Rome

Laid out in a gigantic, tiered staircase of 138 steps, Piazza di Spagna is among the most famous landmarks in Rome. While it is dominated by a broad stairway leading you up the Trinita dei Monti church, Piazza di Spagna also highlights Bernini’s small fountain. A perfect perch from which to view the throngs of people frequenting the nearby boutiques, this square is also an ideal rendezvous and resting spot, especially for weary travelers.

Rome, in itself, may be antiquated, but its culinary scene is definitely not. A trip to Rome is almost synonymous to a taste bud-awakening gastronomic experience. It is a must for you to try out the specialties of any of these topnotch Roman restaurants: 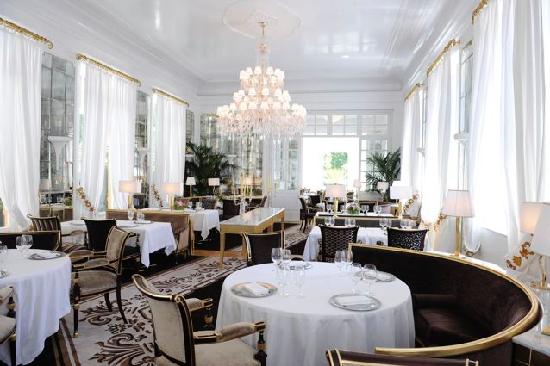 If you are going to try Roman fine dining, then make it at Filippolamantia. Named after its chef, Filippo La Mantia, it is located on the first floor of the Hotel Majestic. The restaurant is perfect for romantic dinners and special occasions, with lunch averaging at USD 51, while dinner costs about USD 100. Try his caponata and pair it with any wine from his list and your night is sure to be deliciozo!

When it comes to Marche-influenced recipes at a reasonable price, your best choice is the family-run Trattoria Monti. With prices averaging at about USD 54 per head, the quaint Trattoria never fails to attract locals and foreigners with its fantastic tortello al rosso d’uovo (large ravioli filled with a loose egg yolk)  and  coniglio in porchetta (rabbit cooked like a Tuscan pork). With a wine list focused on martigiano and verdicchio varieties, a meal at Trattoria Monti is truly a treat.

Address: Via San Vito 13a

After touring the Colosseum, head straight to Enoteca Provincia Romana, a government-run restaurant that promotes the products of Provincia de Roma. With prices starting at USD 14, the Enoteca proves to be a hotspot among hungry diners with its stellar recipes, such as the aubergine Parmigiana with basil pesto.

Accentuated with dazzling southern ceramics, Siciliainbocca features a sunny demeanor and homey ambiance. It’s the perfect place to satiate your craving for Sicilian specialities like the palate-tickling caponata (browned vegetables, anchovies and capers) and legendary desserts, like the cannoli (fried pastry tubes filled with ricotta) accompanied by pantelleria. Prices of food would range from USD 26 to USD 79.

Of course, what good is a trip to Rome without getting a mouthful of pizza? Head out to Pizzeria Remo, a 75-year old pizzeria that is among the best in all of Rome. Enjoy a slice or two of their Pizza bianca con fiori di zucca (USD 10). The store is open at dinner time only and closed on Sundays.