Ngorongoro is nothing less than a sweet magnum opus of nature. No wonder it is dubbed as the “world’s greatest caldera” and the “Eighth Wonder of the World” throughout the decades. Measuring over 12 mi wide, it is the home to a variety of indigenous flora and diverse species of migrating and mating animals, making it the ultimate place for those who love to explore wildlife on foot. With its volcanic foundation and healthy soils, the Ngorongoro crater also proves to be one of the finest grazing grounds in Africa. Now, how could you pass up on such a beautiful work of art?

Ngorongoro in a Nutshell

An intact, unified, and inactive volcanic caldera, Ngorongoro is said to have been formed from a huge volcano whose cone collapsed inward after a massive eruption about two to three million years ago. It occupies 100 sq mi of prime land, and measures a depth of about 2,000 ft. Inside the Ngorongoro Crater, you get to find most of Africa’s wildlife, such as the wildebeest, black rhinoceros, hippopotamus, topis and cheetah, to name a few. Depending on the season, some animals can be sparse, while some can also abound in several locations.

The Ngorongoro Crater floor opens at 7 a.m. and closes at 4 p.m. As a safety measure, all vehicles within the caldera should be out by 6 p.m. The entrance fee for foreigners is USD 50 per day. For a cheaper deal, pay the per car fee of USD 200 instead.

Safe to say, any month of the year is considered a great time to visit the Ngorongoro crater. However, the most optimal time to tour the crater is during the dry season, which spans from May to October. Game viewing is at its finest during these months, especially in lands near the water sources. While the Short Glass Plains is virtually devoid of animals during this season, the Ndutu and Empakaai are in stark contrast, since they are brimming with wildlife.

The off season, which spans from November to April, is considered so because of the monsoons they bring. Although you can expect to be dripping wet during these times of the year, you will enjoy the spectacle of migration, prey vs. predators, as well as animals tending their young in the Short Grass Plains.

How to Get There

Getting to the Ngorongoro Crater requires you to get into Tanzania first through the Kilimanjaro International Airport in Moshi. From here, you can take the free shuttle service to the conservation area. You can also take a cab or a (much expensive) chartered flight to the crater if you wish to avoid any hassle. From Arusha to the entrance gate of Lodoare, you need to endure a 380-mile distance, a 2-hour drive to the center of the Ngorongoro Conservation Area.

Ngorongoro inarguably teems with nature at its rawest yet most beautiful form. It is a witness to many unique experiences formed right on its soil. Make the most out your Tanzanian odyssey by including these activities in your to-do list:

1) Marvel at fine flora and fauna at the Ngorongoro Crater 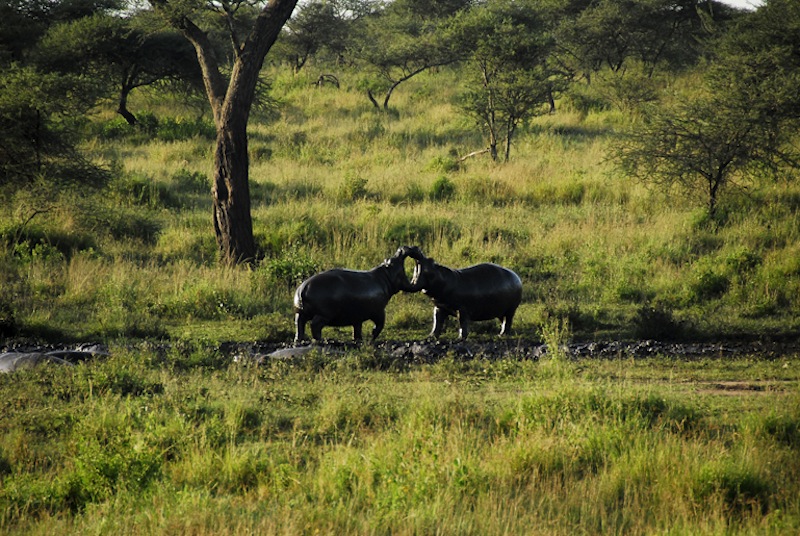 Of course, the foremost thing you should do while in the Ngorongoro Crater is to appreciate its scenic beauty. This UNESCO World Heritage Site is a bigger and better version of the zoo, with its 25,000 large animals that include gazelles, black rhinoceros, elands and zebras. Ngorongoro, too, is better than any botanical garden you have been to, with its rain-watered vegetation, lowland vegetation, highland forests, short grasses, and desert plants.

Witness for yourself where we all “came from” by heading out to the site of the Olduvai Gorge, considered as the most important archaeological site in the planet. This steep ravine is where the remains of the world’s first human beings – the Zinjanthropus – were unearthed. Remains of other early peoples such as Paranthropus and Homo-habilis were also found at this rich, 30-mile long gorge.

3) Pay a visit to Lake Ndutu

This shallow, high-saline basin of water is a terrific location where you can witness the migration of great animals. It has a strategic place, with its proximity to the Ndutu woodlands and the Short Grass Plains. Thus, the Lake Ndutu is a top choice for animals in search of food and shelter.

4) Drive up to the Oldonyo Lengai or “Mountain of God”

A few miles outside of Ngorongoro Crater is the Oldonyo Lengai, perhaps the only active volcano within the area. Although it recently erupted in 2006, its impressive height (6,000 ft) and unique landscape continues to attract visitors from several corners of the conservation area.

5) Be blown away by the Shifting Sands

Located north of the Olduvai Gorge is the Shifting Sands, a black dune made of volcanic ash from the Oldonyo Lengai. The ash from the volcano is blown westward to this plain where you can find dunes as low as 29 ft, to some as high as 328 ft.

6) Journey to the Olkarien Gorge

Another important gorge in the conservation area is the Olkarien, where you can see Ruppell’s Griffon Vultures nest and breed with each other. The best times to see such event are during March and April, when migration takes place, giving the vultures the copious amounts of food they need for mating.

If you are an ornithologist or just a keen fan of avian watching, then you will enjoy the bird watching experience that the Ngorongoro Crater can give you. Here, you can marvel at the sights of saddle-bill storks, stilts, white storks and ruffs (among many others), flying through the crater’s forests, marshes, lakes and grassland plains.

8) Interact with the Maasai people

Visit the Maasai people – a tribe that has lived in the crater area for about two centuries – by dropping by at any of its four cultural bomas. Here, you can learn more about their grazing and herding culture, as well as take pictures with them. You can even purchase exotic souvenirs from the Kiloki Senyati, Loonguku, Irkeepusi or Seneto cultural bomas within the conservation area.