Although it is believed to be the mythical battle grounds of Hercules and the Titans, Mykonos is anything but a wasteland of fallen giants and triumphant gods. In fact, its panorama speaks otherwise: with world-famous nudist beaches and its own brand of gay/lesbian-friendly nightlife. Snuggled among the Cyclades Islands in Greece, the stunning Mykonos is a paradise you would have to see and set foot on to believe. 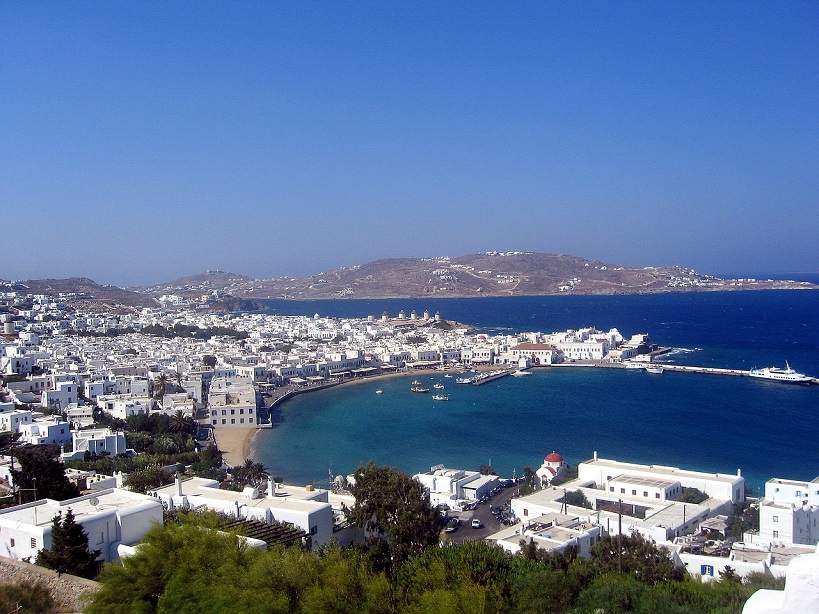 July and August, said to be the months that comprise the summer season, are the best times to visit the tropical island of Mykonos. While daytime temperatures peak to as much 30 degrees Celsius, the soothing meltemi or constant wind alleviates the scorching heat in the island, making Mykonos a haven amongst swimmers and sunbathers.  As with any other famous tourist destination, expect crowded hotels and bars during the summer season. But if you are looking for a more peaceful vacation– and lower airfares and hotel rates–consider going to Mykonos in May or September to October. While temperatures and generally colder, with some monsoon showers in October, these months feature generally quieter bars and hotels that are not as jam-packed as you would have expected.

Because of the government decree that bans motorized vehicles in most streets, you don’t have to spend a lot in transport fares while in the island. After all, Mykonos is a “walking” city, so expect to move your body while in the island. If walking is too tiresome for you, you can always rent a bike or ride a donkey! For farther inland attractions, you can catch a bus in stations near the Archaeological Museum and the Olympic Airways office. Taxis can be hailed for trips outside of the city center. If you’re willing to drive though, cars and mopeds are widely available for rentals. But if you are considering hopping to the islands of Elia, Agrari and Super Paradise, of course you are going to hop on a boat ride from the Platis Yialos dock. Do note, however, that these caiques are virtually non-existent from October to May.

Experience the best of Mykonian culture by engaging in its colorful festivities and all-out celebrations. Time your trip around these events.

This flamboyant 3-week event, celebrated annually after lent, draws a lot of tourists and interested locals every year. It is characterized by parades that honor the events (satirically) of the past year.  Should you decide to visit Mykonos during the Carnival, make sure to pack on some costumes in order to blend in with the festive crowd.

Celebrated yearly every March 25, the Greek Independence Day is the Mykonian equivalent of America’s fourth of July celebration. In commemoration of Greece’s freedom, Mykonos, as well as other cities in Greece, celebrate it with lively celebrations and marches. Many restaurants are closed this day, so good luck with your eating needs!

If you are looking for the ultimate party celebration, then make sure to visit Mykonos during its eccentric Summer Festival. Held every July, this event features parties, open-air concerts and theatrical exhibitions that will keep you dancing until the wee hours of the morning.