20 Places to Watch the Sunset Before You Die. #17 Will Surprise You.

There aren’t many things in this world that are as beautiful as a sunset.  A sunset also signals an end to your day and an opportunity to hit the reset button.   Although it happens everyday, watching a sunset can be an unforgettable experience if it is in the right setting.  To help with that, we have compiled a list of the 20 best places to watch the sunset.  Let us know which places you’ve been to and let us know how it was.  And don’t forget to check out our other amazing galleries! 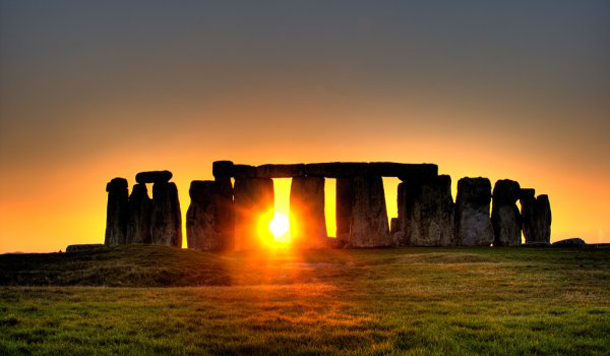 Stonehenge is located in Wiltshire, England, and is most famous for its prehistoric monuments and the nearby burial grounds, built between 3000 BC to 2000 BC.  Photo credit. 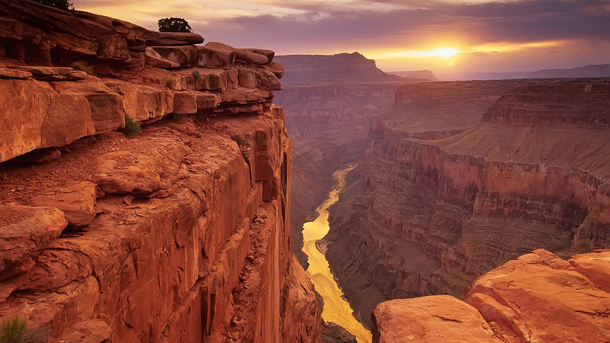 The most majestic views of the canyon can be seen from the North Rim.  But when it comes to watching the sunset, you can’t go wrong watching it anywhere at the Grand Canyon. 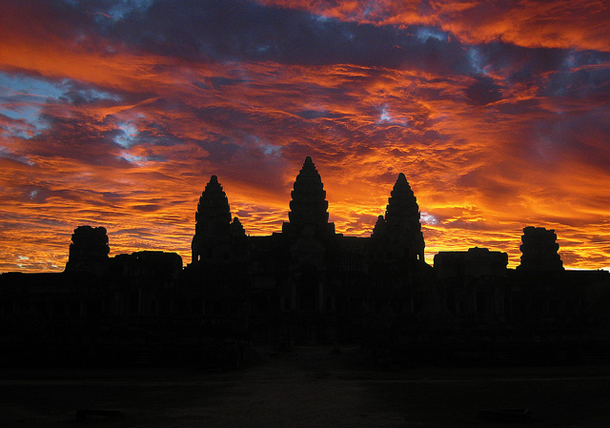 Phnom Bakheng is a Hindu temple that sits on a top of a hill, giving a great view of its more popular sister temple, Angkor Wat, less than a mile away. 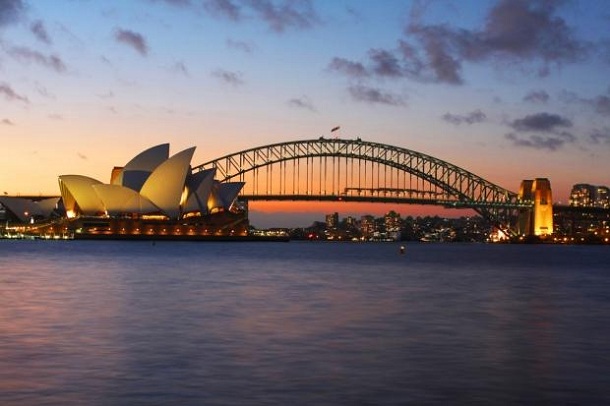 If romance is what you are looking for, then a dinner cruise is available to take you around the opera house, under the bridge, and to a prime location to watch the sunset.  The Sydney Harbour is a great place to watch the sunset if you want to see an ultra-modern metropolis in the foreground. 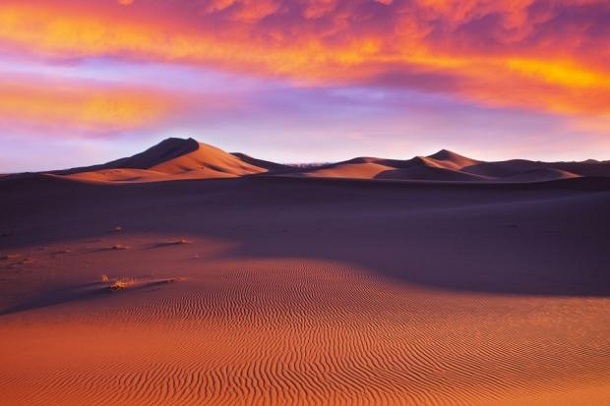 If you want to watch the sunset in the largest desert north of the equator, the best option will probably be catching a camel out for a multi-day trip.  With zero light pollution at the desert, you will be able to see every visible star in the sky during the night. 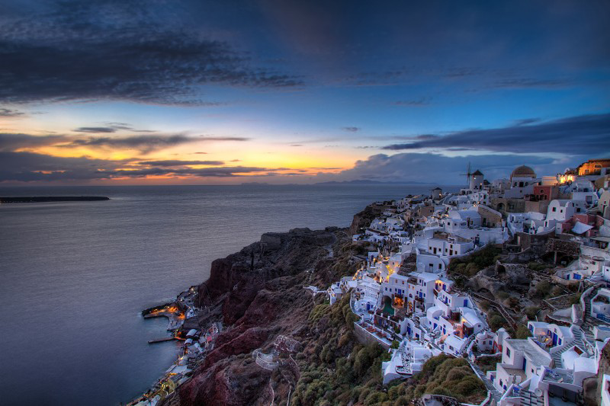 This Greek city was built from the remains of an enormous volcanic explosion.  Watching the sunset on the collapsed caldera is just about the most romantic thing you can do. 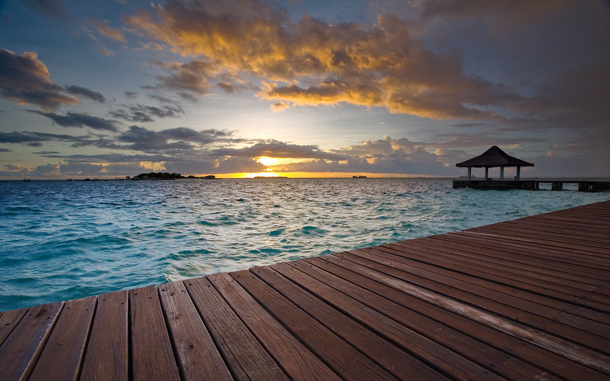 An island nation in the Indian Ocean consisting of 26 atolls, the Maldives is perfect for a secluded and peaceful getaway to enjoy the sunset. 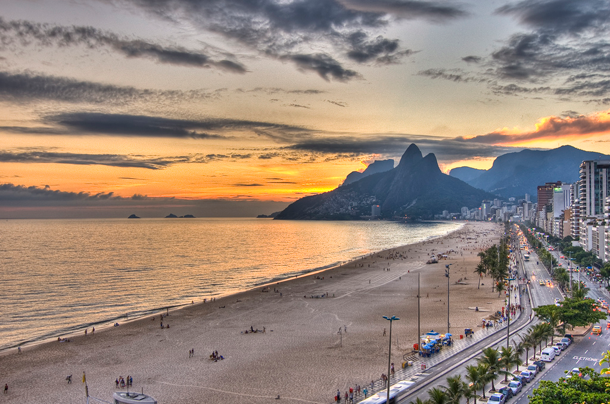 People corral around Ipanema Beach in the summer and applaud as the sun sets.  The sun eventually sets behind the mountains on the west side of the beach.  Ipanema Beach is perfect for those wanting to do hardcore partying after watching the sunset. 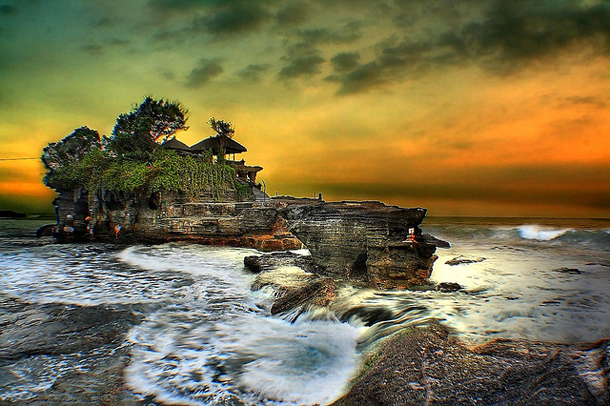 Tanah Lot is actually a rock formation that a temple is built upon.  The temple sits on a large offshore rock that has been continuously transformed over the years by nature.  Because of its unique backdrop and geological makeup, Tanah Lot is an extremely popular location for travel photographers. 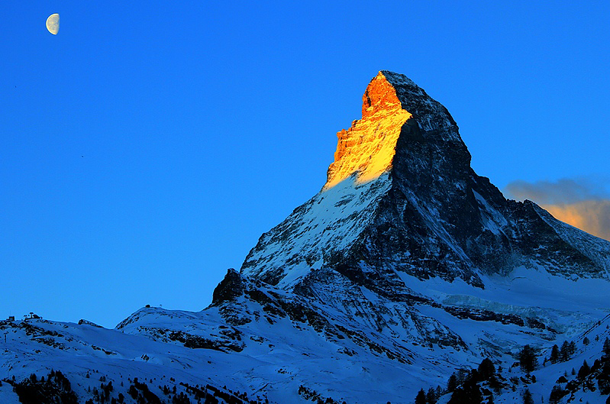 Matterhorn is a mountain that borders Switzerland and Italy.  It is one of the highest peaks in Europe, with a summit measuring at 14,692 feet (4,478 meters) high.  At this height, you can watch the sunset from above the clouds. 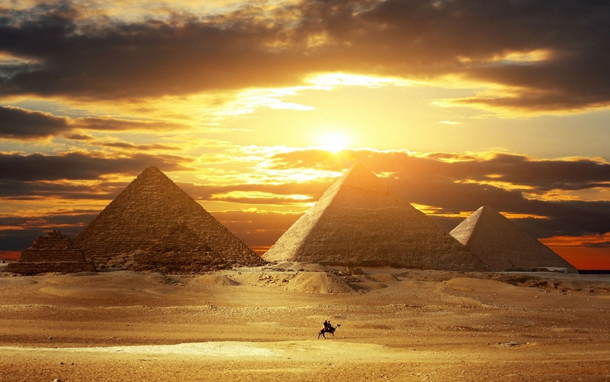 The Great Pyramid of Gize is the only one of the Seven Wonders of the Ancient World still standing.  Many theories have been proposed about how it was built, but science still has yet to find a definitive answer as to how people thousands of years ago were able to build something of such elegance and grandeur. 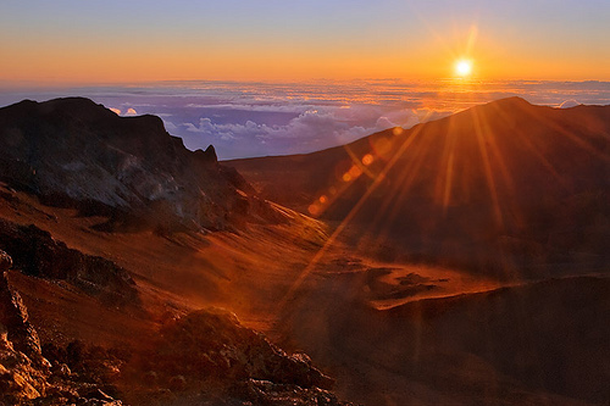 The peak of this volcano is one of the highest points of elevation in the state of Hawaii, standing at 10,023 feet (3,055 m).  Because of its favorable atmosphere, Mount Haleakala is one of the more prominent sites for astrophysics research and the site of many space telescopes.  Photo credit. 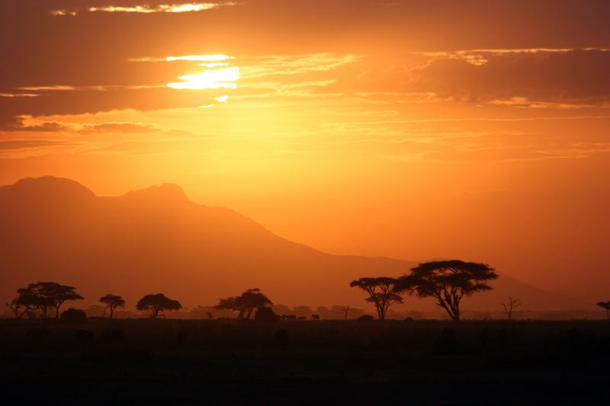 Serengeti is an ecosystem in Tanzania that is home to largest terrestrial migration in the world, and is one of the Seven Natural Wonders of the World.  Serengeti is a wonderful site for tourists who want to get the best bang for your buck because can visibly see Mount Kilimanjaro (which is 180 miles away) and Ngorongoro Crater is just a short drive away.

14) The Canals in Amsterdam, Netherlands 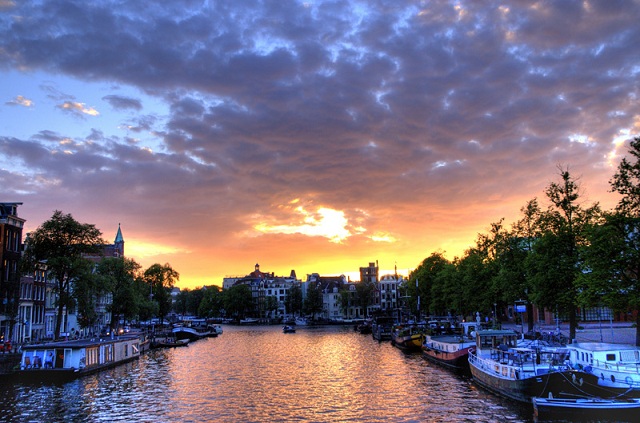 Yes Amsterdam is famous for its liberal stance on drugs and prostitution.  But this canal city has a lot to offer for those wanting an intimate getaway.  Enjoy a nice sunset on a gondola with wine served as you watch the sunset in the capital of Netherlands. 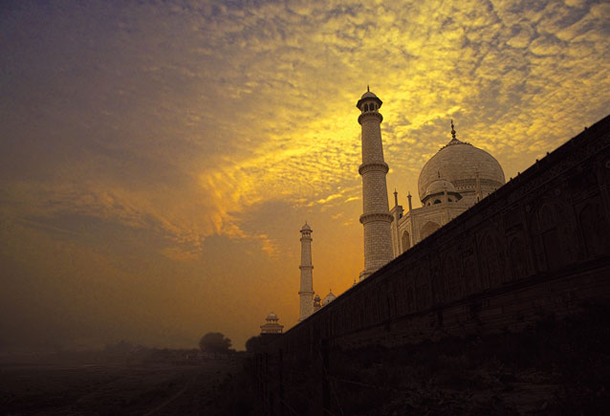 Built in 1632, this palace in India is not only said to be the “jewel of Muslim art” but is also considered one of the “universally admired masterpieces of the world’s heritage.”  No matter what faith or nationality you are, the Taj Mahal is one place you must visit before you die. 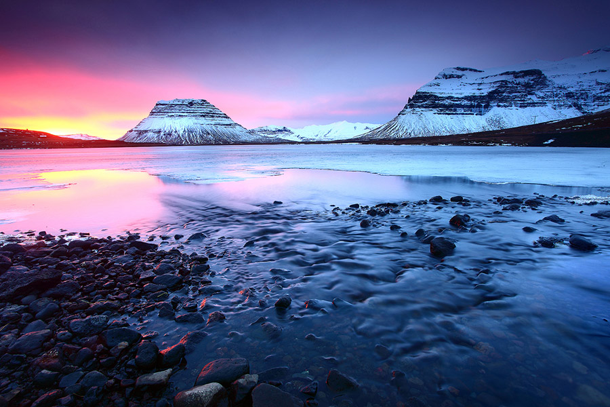 Grundarfjodur is a small town on the peninsula of Iceland with a population of less than 1,000 residents.  But the combination of nearby glaciers, rolling hills, coastlines, lakes, and waterfalls make for a very memorable sunset.  Photo credit. 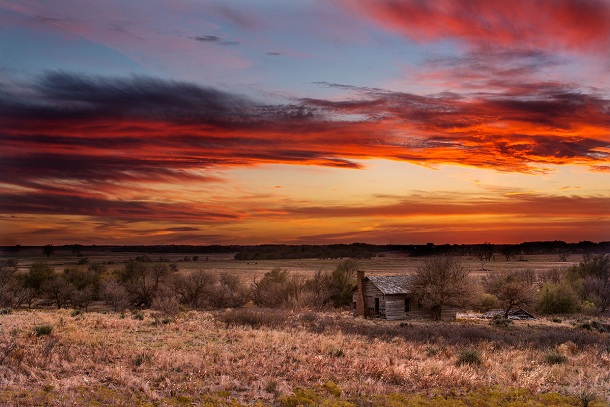 Flint Hills is probably the most inconspicuous location on this list, but don’t let that fool you.  The sunset seen in Flint Hills is second to none; the orange skies combined with the hills of Flint Hills make for an extremely climatic sunset. 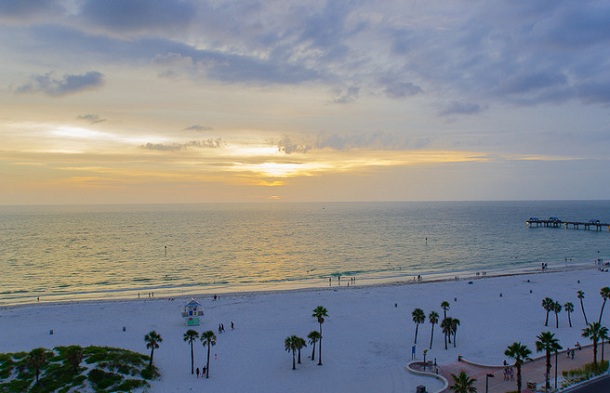 Clearwater Beach is 2.5 miles of white sand beach facing the Gulf of Mexico and is one of the more popular tourists spots on the coast of Florida.  Photo courtesy of Tampabay.org. 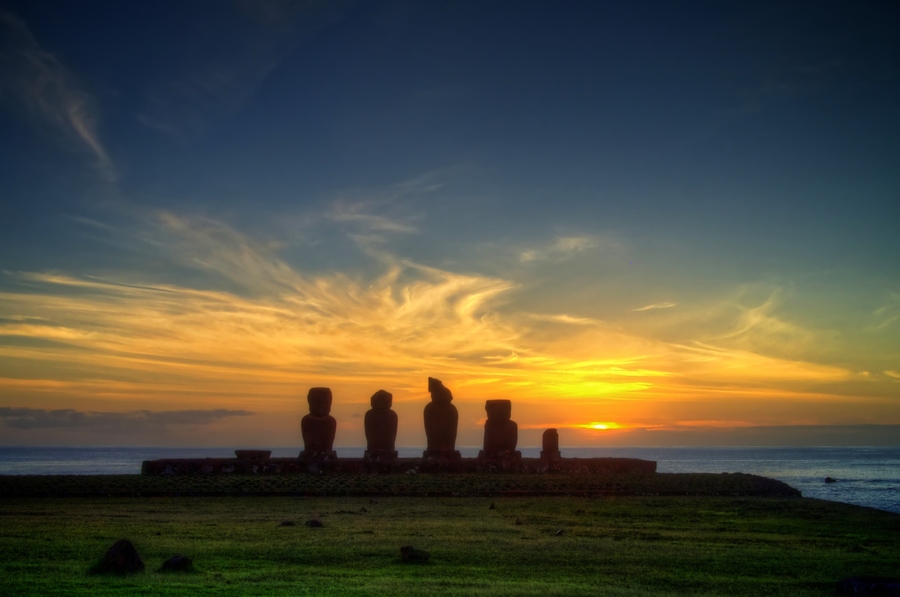 Easter Island is known for its mysterious statues called moais.  During the later part of the day, people migrate towards the moais to watch the sunset.  Photo by Robert Peverati 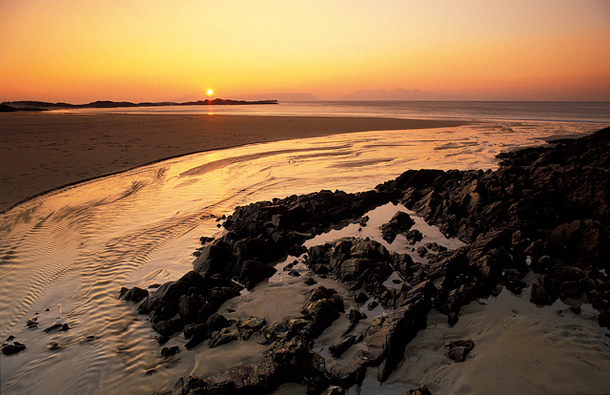 This historic area in Scotland is sparsely populated, leaving only the surrounding mountain ranges and you to watch the sunset in solitude.

Check out our other popular galleries, including 15 pictures that will make you feel insignificant, 15 amazing pictures of full moon at night, and 10 incredible pictures of Fiji.