Set foot on Potala Palace and let the place whet your imagination as it brings you to a trip down Tibetan history. You will soon forget the exhaustion and all the huffs and puffs you had when you took the several flights of stairs on your way to the entrance. The altitude may have posed as a great challenge especially if you’re a person who’s not acclimatized to it, but what sweet rewards await you when you reach the top– breathtaking, panoramic views of Lhasa! The intricately-painted walls fantastically foreshadow the beauty of what’s to come– soon, you be greeted by a sight you’ve probably never seen your whole life.

Potala Palace in a Nutshell

The Potala Palace is perched above the famous Red Hill of Lhasa, on what used to be the ruins of the White/Red Palace. The name of the palace, “Potala,” was derived from Mount Potalaka, a hill in South India, said to be the home of Avalokitesvara or the “Lord of the World.”Built in 1645, it was intended to serve as a chief residence of the Dalai Lama, well until the 1959 Tibetan uprising. The construction of the palace was conceptualized by Konchog Chopel, adviser of then-Dalai Lama Lozang Gyatso. Chopel suggested to the Dalai Lama that the Red Hill was the best location of the seat of government, since it was halfway between the Buddhist monasteries of Sera and Drepung. Over centuries, Potala’s interior has been ornately designed: vibrantly-colored and magnificently-detailed paintings cover the walls and shelves of prayers books tower overhead.

Truly a marvel of architecture, this hilltop fortress spans approximately 1,300 by 1,148 ft wide, with 9-ft thick walls and 16-ft thick bases. The architect insisted the pouring of copper on the foundations to make the palace earthquake-proof. Once inside, vacationers will be treated to the majesty of a 13-storey building, designed with 1,000 rooms, 200,000 statues and 10,000 shrines in honor of Dalai Lamas and different Buddhist deities.

Because of the ever-changing climate in Tibet, the best times to visit the Potala Palace and Lhasa in general are from May to July and September to October. During these months, Lhasa, as well as Tsetang and Shigatse, are enjoying balmy climates that are conducive to all types of sightseeing tours. August, on the other hand, marks the start of the monsoon season. Unfortunately, the frequent rains make access to the Potala Palace difficult, if not perilous. The months of October to April, on the other hand, come with heavy snowfall that blocks the roads leading to the citadel. So if you want to make the most out of your tour, avoid these months at all costs. 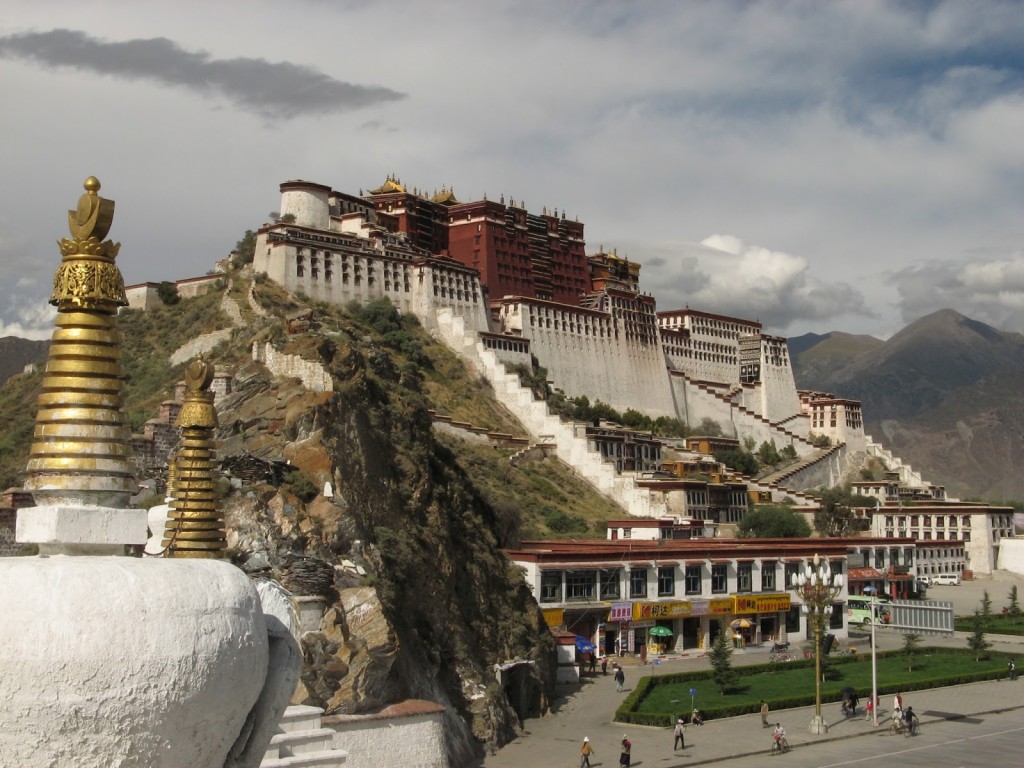 nless you are a Chinese citizen, you will not be able to enter Tibet without a special visit permit. Individual permits are hard to procure; group permits for at least 5 tourists, on the other hand, are easier to secure. You also need to hire a tour guide if you wish to visit the Potala Palace.

Once you have your special permit with you, you can book a flight to the Lhasa Gonggar Airport, which is located 31 mi away from the city. Lhasa flights usually originate from Chinese provinces, such as Beijing, Guangzhou, Shanghai and Xi’an. There are some flights that come from Kathmandu, Nepal as well.

Buses heading to Lhasa are widely available, too. You can catch one from Zhongdian in Yunnan or Kathmandu in Nepal. By train, you can catch a ride from Beijing, Chengdu, Chongqing, Shanghai, Guangzhou, Lanzhou and Xining. Be prepared for a lengthy travel time, since the voyage can last from 24 hours (from Xining) to as long as 55 hours (from Guangzhou.) Whatever form of transportation you wish to take, what’s important is that you catch a bus or cab to the Beijing East Road. From here, you can take a taxi or tricycle, or just walk towards the Potala Palace.

What You Need to Know

The Potala Palace is open from 7:30 am to 6:40 pm from May 1 to October 31. Opening hours are then condensed from 9:00 am to 4:00 pm starting November 1 to April 30. Admission fees vary per season. The peak months. from May to October, come with a USD 33 ticket fee. During the off-season months, from November to April, the entrance fee is reduced to USD 16.50. Book your tickets early since they are limited in number.

The touring time is regulated to just an hour. Guests can enter the palace only through the east entrance. Walk carefully since the steps are a little slippery. Visitors are advised to bring an overcoat as it can be nippy inside the fortress. They are, however, discouraged to bring bottled water, since all kinds of liquids are prohibited inside the citadel. Since the Potala Palace was constructed for Buddhist purposes, many rituals and practices are observed in the palace. As such, guests are discouraged from wearing hats and stepping on the thresholds of the fortress. Taking of pictures is prohibited inside the palace; photo sessions can only be conducted outside.