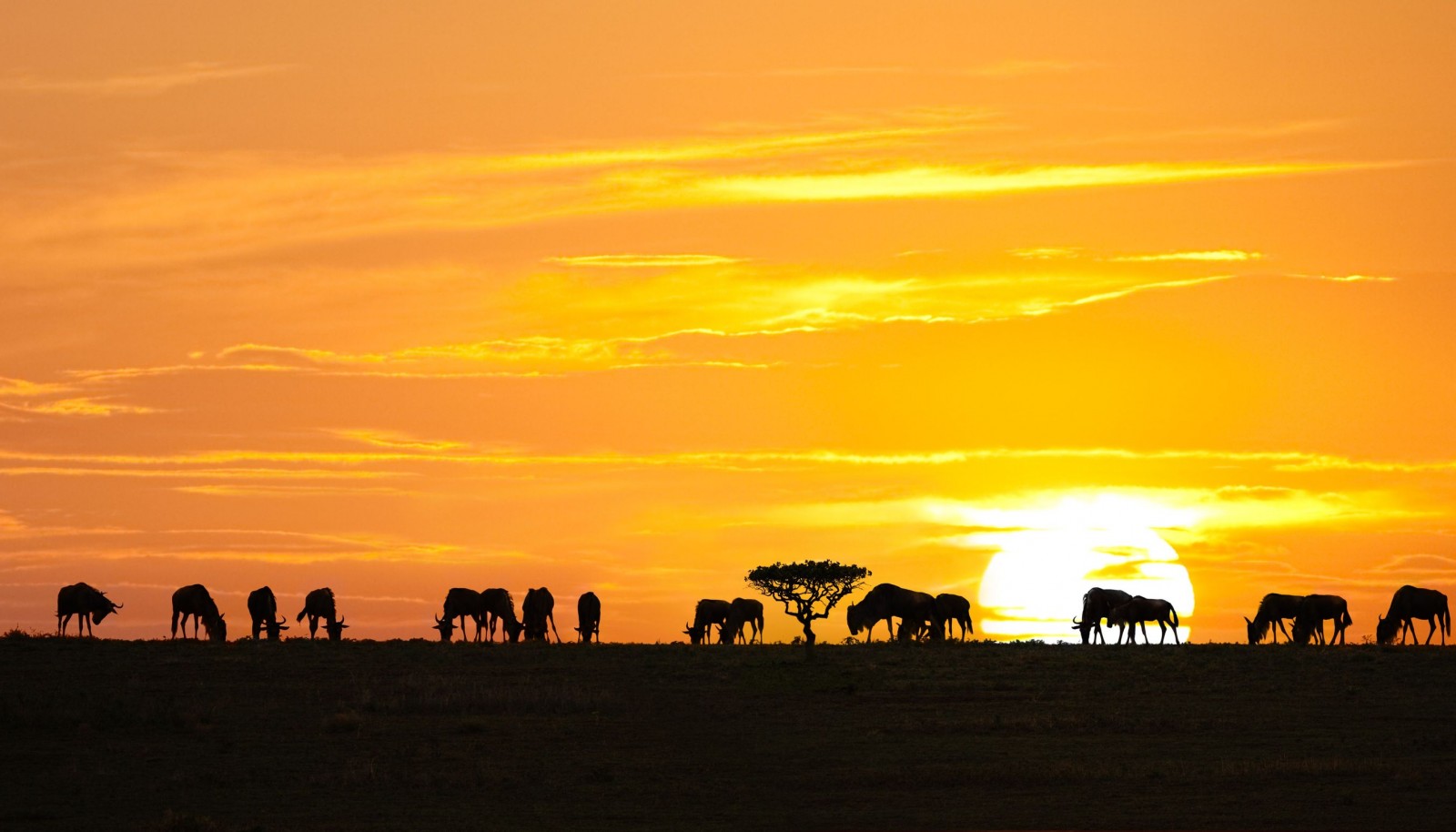 Before venturing into the vast unknown world of wild animals, go to the park headquarters at Seronera to pay the park conservation fee of USD 60 per day per person above 16 years old, USD 20 per day per person 5-16 years old, and free for children below 5 years old. Take time also to browse at the visitor center and keep yourself informed about the park and the animals living in it. There is a coffee shop and picnic site to laze into before you take off to your itinerary.

This hooved pilgrimage of prides, herds, and packs is the heart of this travel to Serengeti, and there are free viewing sites. In winter, you should lay in ambush at the southern plains. In spring and summer, you will catch the untamed menagerie in Central Serengeti or in the Western Corridor. Just before summer ends and well into autumn, head north to see wildebeests fall in stride with zebras, elephants, and giraffes. Check out safari operators or hire a guide.

Location: All over Serengeti National Park

Looking at the staggering population of each breed of fauna that thump in columns during migration, you wouldn’t think that any of those species would reach a point of extinction. There was a time, however, when Tanzania’s black rhino population was nearly wiped out by poaching, except for only two females. Amidst bleak hope of ever gaining in number again, a singular young bull ambled by. And from there, Serengeti’s black rhino started to grow again. Rajabu, that rhino patriarch manages his small herd of 12, alongside hyenas, giraffes and lions in the lush valley of Moru Kopjes. While you are here, check out the Maasai paintings on the boulders that served as canvas to tribal works of art.

Spend a couple of hours at the central part of Serengeti and look for the deep muddy puddle where Seronera River and Orangi River meet. It is a hippopotamus pool where every inch is occupied by dueling and naughty hippos. It is relatively safe to have a close look at the large animals, but always be watchful and keep a good distance.

After learning so much about the four-footed animals, it will be refreshing to note that there is something in Serengeti that belongs to the human genus, something that dates back 1.9 million years ago. In fact, the prehistoric archaeologic discoveries belonged to two of the earliest specimens of humans, and this part of Serengeti is fondly referred to as the “cradle of mankind.” The Olduvai Gorge is a 30-mile long steep ravine in the eastern Serengeti Plains. The site was believed to be a part of a large lake covered with thick deposits of volcanic ashes, and inhabited by Homo habilis 1.9 million years ago, and Homo erectus 700,000 years later. The museum contains tools and other domestic items. There is a nearby Maasai village that can be visited for their dances and culture. A guided tour is recommended to really appreciate the importance of the museum and the gorge, and a fee costs from USD 5 to USD 10.

The valley teems with life and lush vegetation. Gentle gazelles, wildebeests, giraffes, and elephants graze on the grassland. They also fall prey to lurking lions, cheetahs, and the elusive leopards. These pillaging cats lithely poise at their prey and these grassy plains become bloody arenas. Permanent lodges are located on these parts of the park and make for prime viewing spots.

This is the site where most of the predators lunge on their kill. Huge crocodiles inhabit the rivers in large populations. Oblivious herds of migrating wildebeests and zebras cross the river no matter what. The bloody feast is as much an annual phenomenon as is the migration. The gory tableau is nature’s graphic illustration of the food chain, or its harsh version of survival of the fittest. Whichever it is, it’s not for the weaker gut.

In 1913, when the American hunter-turned-conservationist Stewart Edward White called Serengeti a paradise, he was looking at the Lobo Valley. This is home to the three big felines (the lions, cheetahs, and leopards), the elephants, giraffes, and ostriches. Extreme dry season drives the migration this side of Serengeti between June and November.

This is a quietly-tucked away spring and canopied forest near the border of Maasai Mara Game Reserve. Hundreds of large mammals head for this part to sink their snouts into the cool waters. Birds and monkeys are the regulars of this leafy refreshing spot.

Like earlier said, learn about Serengeti before plunging into its vastness. Learn about the Big Five which refers to the five African mammal species – the elephant, rhinoceros, buffalo, lion, and leopard. The few rhinoceros that remain alive are in Moru Kopjes; the elephant, buffalo and lion are quiet visible all over the savannah. The leopard, though, is the most elusive. But if there’s one place in Africa you will likely observe the leopard, it is Serengeti. The cats are easier to spot during the driest months of September and October when deciduous trees shed their foliage and the lissome cats have less to cover their forms with.